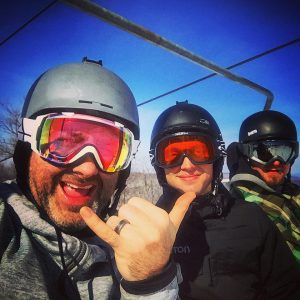 Professional snowboarder turned songwriter, Shawn Owen performs 300+ shows per year as a solo performer and fronting the Shawn Owen Band, sharing the stage with national acts such as The Wailers, Slightly Stoopid, G. Love and the Special Sauce, Dropkick Murphys, Passafire, Michael Franti and Spearhead, Donovan Frankenreiter, Larry Keel, Dirty Heads, The Aggrolites, Iration and many more, bringing their distinctive reggae/jam/ska/party vibe throughout the east coast from upstate New York to southern Florida and all in between. Their debut full length LP "Make Money" is scheduled for release June 2015 with national tour to follow.

"Shawn Owen has the ability to kidnap his audience and transport them to a beach with family and friends."
-Blair Campbell, owner of The Pretty Penny Cafe

Chill. That’s Shawn’s style and sound. That’s the best way to describe it... His versatility and passion are undeniable in every performance. Shawn is lightly finger picking and singing a beautiful falsetto one minute, then violently strumming and screaming with aggression at a defenseless microphone the next. Watching Shawn perform, you will go through these emotions with him: relaxation, energy, love, aggression, peace and struggle. Then later, you'll be singing his original tunes in your head for days.

Owen released his debut album as a solo artist in early 2012 at Carnegie Hall in Lewisburg, WV. In this 6 song acoustic EP, Shawn writes about life, love, pain, joy, loss and other topics that relate to all our lives. Leicester Bangs says "assured writing is delivered with a solid, distinctive voice." TAXI describes the album as "catchy reggae styled groove. Interesting & clever lyrics..."

Bob Marley, along with Sublime and Jack Johnson, are acknowledged as Shawn’s biggest musical and dispositional influences. Along with many other inspiring artists, these icons have helped shape Shawn’s unique sound.

Shawn began his professional music career by forming Stolen Element in 1999, playing a home brewed style of punk-rock reggae music while manning guitar and vocals over a ten year span. As the band dissolved, Shawn took to the solo route and has excelled in Annapolis, MD where he now calls home.

In the world of reggae music, much of it has a feel good vibe when it comes to the music, but the lyrics paint a different story. Historically, it has tackled social, political and financial injustices. Whether it was Marley, Tosh or any host of other artists over the years, the style of music has […]

From the early 1920’s to the ’70s days of Carr’s Beach when touring national artists including Ray Charles, Louis Armstrong and James Brown would enjoy a Sunday layover through to the ‘80s glory days of Charlie’s Westside-owned by Charlie Hiltabildle, who nurtured hometown music-Annapolis has enjoyed a rich musical heritage. Since that time, we’ve had […]

Shawn Owen of Annapolis, MD, will serenade you with an effortless soul that speaks of a raw emotion he might have only set to a strum yesterday.  His journey, however, spans years of moves over the states of West Virginia, Colorado, and Maryland, and multiple career changes with many great friends known from childhood and […]